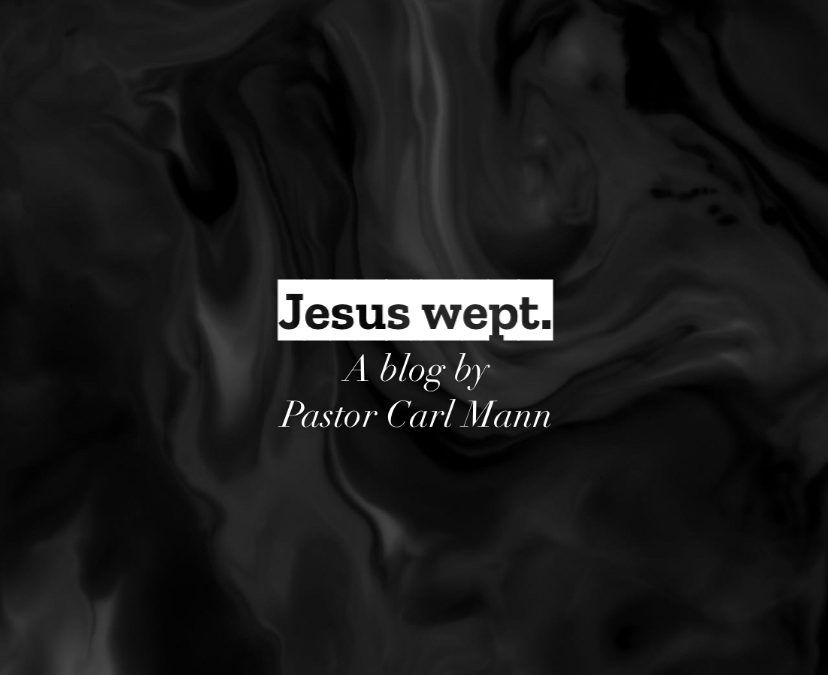 The last 18 months of my life have produced many circumstances wherein grieving was the natural emotion and the consequent rise of tears overwhelmed the capacity of my eyes to contain them – therefore, they overflowed their “pooling,” and ran down my cheeks. In other words – I wept. My being human was evident.

I believe that today’s Scripture, above all Scriptures, presents conclusive evidence of the blessed mystery of the “God-Man,” Jesus Christ of Nazareth!  It is this particular Scripture that displays the fullness of John 1:14 (KJV) “And the Word was made flesh, and dwelt among us, (and we beheld his glory, the glory as of the only begotten of the Father,) full of grace and truth” with distinct clarity.

The Man, Christ Jesus received word that Lazarus, his friend, was dying of a grievous sickness. After hearing this distressing news, Jesus continued His purpose of pleasing His Father above all else.  While Jesus took this important information to heart, He continued the mission His Father had ordered and remained in the region of the Jordon where John the Baptist had worked (John 10:40); for, His Father had ordained that many would believe on Him.  After all, Jesus had been sent to “seek and to save that which was lost!”

While pondering this, do you not think that Jesus might have been “tempted” to deviate from His mission so that He could go to His friend’s aid?  Why didn’t He do so?  Some could suppose it was because He knew that His Father had ordained for Him to raise Lazarus from the dead to prove that He was God.

I contend, however, that Jesus chose to conform to His requirement for faithful discipleship…

Jesus chose to “deny” the emotional prompting of His human nature to fulfill His Divine Destiny!  I believe that Jesus received His “marching orders” in the special times of prayer He had with His Father.  I believe His “steps” were being ordered by the Holy Spirit and He “learned” how to submit His human desires to the desires of His Father!  We must learn to do the same – IF we are determined to “finish well!”

Jesus relied upon the trust He had in His Father, as well as that of the experience He had in His Own ability to discern the voice of His Father clearly.  You see, as Jesus was growing up naturally, He was growing up spiritually as well!  This is the importance of instilling Godly principles and practices into our children from the “womb to the tomb!”

Jesus could have surrendered to His flesh (humanity) to accommodate the self-justification for postponing His mission to go “do ministry!”  However, IF He had done so, He would have displeased His Father, pleased Himself, and violated His principles of discipleship.  In fact, it was in that process of Jesus obeying His Father that His mission became clearer.

As Jesus walked into the crowd of mourners and saw Mary and the Jewish friends weeping, He “groaned in the spirit, and was troubled” (John 11:33).  Another way of saying this would be, “He became angry in His spirit and was greatly agitated.”  You see, being human, Jesus had to learn that most of humankind lives in the “now,” the temporary, and the consequential.

Since He was, is, and always will be the “God-Man,” Jesus had learned to live in the “I Am,” the eternal, and the predetermined in His human form and enlarged His understanding of lost humanity.  After all, He was the “resurrection, and the life,” (John 11:25)!  Jesus – the “Resurrection” – was standing in their midst and all they can do is weep?!

Nonetheless, “The Word made flesh,” did NOT hide His humanity; but rather He evidenced the depth of His humanity when He wept with those who wept.  Imagine, the Majestic God lowered Himself to allow Himself to feel the depths of grief that fallen humanity feels at the death of a loved one!

Jesus was about to raise Lazarus from the dead, yet He identified so fully with humanity that He wept with those who wept!  Perhaps, in shedding His sanctified tears, Jesus consecrated the tears that all saved humanity would shed and presented those tears as a “language” that God would listen to and understand!

Psalm 56:8 (KJV) “Thou tellest my wanderings: put thou my tears into thy bottle: are they not in thy book?” (Emphasis Added).

Psalm 56:8 (NLT2) “You keep track of all my sorrows. You have collected all my tears in your bottle. You have recorded each one in your book” (Emphasis Added).

Jesus did NOT have to wait until He had resurrected from the grave to gain the power to resurrect the dead!

John 11:24 (KJV) “Martha saith unto him, I know that he shall rise again in the resurrection at the last day” (Emphasis Added).

Jesus walked in the power and the spirit of holiness…

Romans 1:4 (KJV) “And declared to be the Son of God with power, according to the spirit of holiness, by the resurrection from the dead:” (Emphasis Added).

Think about it – “The Word made flesh” walked in divine power, divine promise, and divine presence, YET “Jesus wept!”

Why should this bring us comfort?

Hebrews 4:15-16 (KJV) “For we have not an high priest which cannot be touched with the feeling of our infirmities; but was in all points tempted like as we are, yet without sin. Let us therefore come boldly unto the throne of grace, that we may obtain mercy, and find grace to help in time of need” (Emphasis Added).

The Man, Christ Jesus of Nazareth – our Lord and Savior – identifies with our pain and grief. He weeps when we weep. He laughs when we laugh. He rejoices when we rejoice.

“Jesus Wept!” Our tears ARE a language our God understands!