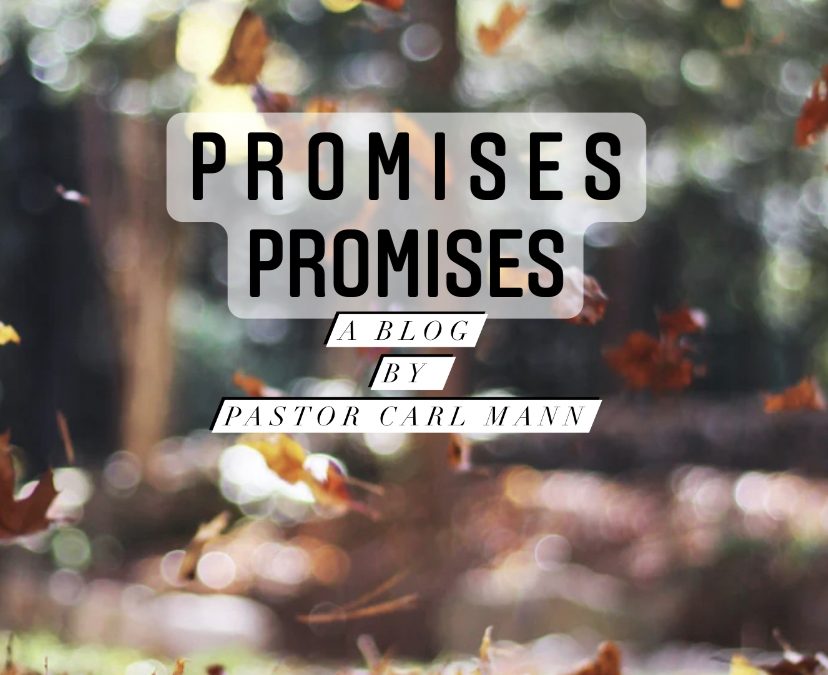 Isaiah 25:8 (KJV) “He will swallow up death in victory; and the Lord GOD will wipe away tears from off all faces; and the rebuke of his people shall he take away from off all the earth: for the LORD hath spoken it” (Emphasis Added).

This is the time of “Promise Making!” Our National Election is scheduled for the upcoming Tuesday – November 3. ALL political candidates are making “Promises” and few people will hold those who are elected accountable. The people whose choices were NOT elected will continually point out the “Promises” that were made and not kept!

Over the years, I have become weary of people saying, “I promise,” then seemingly dismissing the necessity of fulfilling their promise, or failing to at least come back with an apology for not being able to do so.  Then there are those who hide behind the Scripture in James 4:15 that states, “For that ye ought to say, If the Lord will, we shall live, and do this, or that.” Once again, I have had many say this and their consequent actions conveyed that they had no intention of doing what they would later blame God for “not allowing!”

God is NOT a liar!

The Jews demanded proof that Jesus had the authority to overturn the money changers’ tables and drive them out of the temple with a homemade whip. Jesus stood in the temple at Jerusalem and said, John 2:19 (KJV) “Destroy this temple, and in three days I will raise it up.” Jesus made this bold “promise” in response to their demand!

Being totally soulish, the Jews thought Jesus was referring to the temple He had just cleaned out – because Jesus had called the temple, “…my Father’s house…”  However, Jesus was promising that He would rise again from the dead after three days!

John 2:21-22 (KJV) “But he spake of the temple of his body. When therefore he was risen from the dead, his disciples remembered that he had said this unto them; and they believed the scripture, and the word which Jesus had said” (Emphasis Added).

In today’s opening Scripture, Isaiah is receiving the prophetic promise from God that the overwhelming sense of death, depression, and despair of captivity that Israel was experiencing was going to be reversed.  The tears they were shedding by the willow trees in captivity would be wiped away and the shame they bore would be taken away.  This was a promise from God’s lips!

The captivity of Israel to Babylon was removed and eventually Jerusalem was rebuilt and replenished.  However, when Jesus made His bold promise to “rise again,” Israel was in bondage again – to Rome!  Their greatest bondage was to sin; and death is the penalty for sin!

We celebrate Jesus’ ability to keep His promise on Resurrection Sunday (and every day)!

Because Jesus rose from the grave Paul, under the inspiration of the Holy Spirit, wrote…

I believe, somehow Isaiah rejoiced at the fulfillment of this promise!

When Jesus kept His promise and rose out of the grave, He did not do away with death – He destroyed its sting of hopelessness and despair.  Because Jesus has risen, death was conquered so that it remains now as the messenger to “call us home!”

How do we know this?

Jesus made another promise…

John 14:1-3 (KJV) “Let not your heart be troubled: ye believe in God, believe also in me. In my Father’s house are many mansions: if it were not so, I would have told you. I go to prepare a place for you. And if I go and prepare a place for you, I will come again, and receive you unto myself; that where I am, there ye may be also” (Emphasis Added).

Beloved, Jesus already kept the most “impossible” part of His promise – He has risen from the dead! I am persuaded He WILL keep all His promises!

What “Promise” are you standing upon today? Remember, Jesus IS God’s “Promised Seed of Woman” Who would, and has, overcome Satan! You CAN “stand” upon His Word!