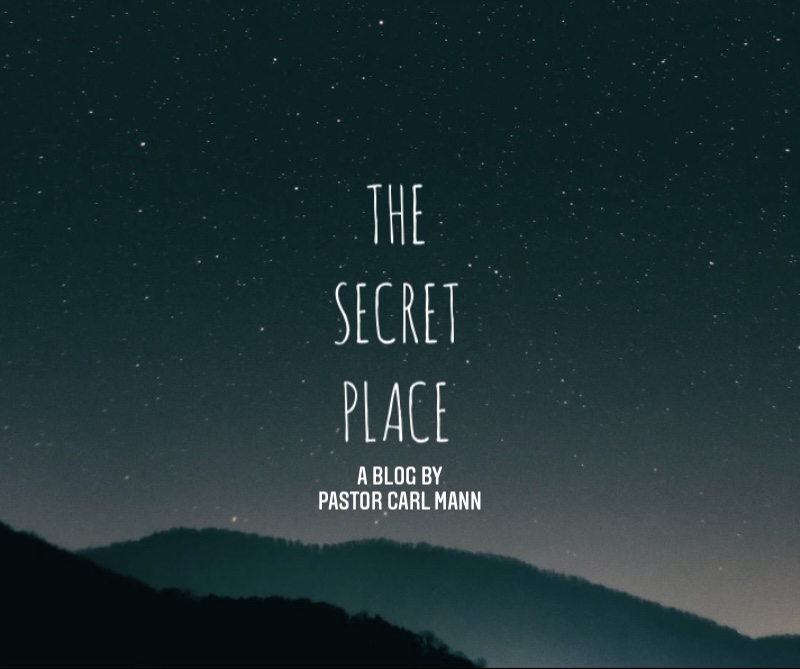 Psalm 91:1 (KJV) “He that dwelleth in the secret place of the most High shall abide under the shadow of the Almighty” (Emphasis Added).

If ever there were a time that most people wished they had a place where they could “hide” from all the dangers and disappointments in life, this “Virus Pandemic” would be it! Our country was “shut down” and everyone encouraged to stay in “hiding” to avoid spreading the “unseen enemy.” Nevertheless, the “Virus” continues to spread its infection – there is no “place” wherein one can “hide” from it. BUT God!

Did you have a favorite hiding place when you were a child? How about a tree house – did you have one, or did you build one with some of your friends?  When you played “Hide and Seek,” did you have a special place to hide wherein no one was able to find you?  If you did, were you wise enough to not reveal this place just in case you wanted to play again?

The neighborhood I grew up in was a very safe area.  The streets – YES, the streets – were occupied, along with many front yards by many of us children as we played baseball, tag, “kick the can,” and various other games.  One of our neighbors across the street built a “fort” in his back yard.  It was a well-constructed club house with a second floor that was surrounded with a picked-pole protection wall without a ceiling that was accessed by a built-in ladder. The building was painted brick-red to give it a more “official” fort appearance.

I forgot to mention that the entry to the second floor from the ladder was a two-hinged lift door that could be locked from the top to prevent the “enemy” from climbing to the top.  I remember my fingers getting smashed a couple of times (I was a slow learner, or hard-headed in my youth) as I tried to push the door open!  The odd thing was, my fingers were smashed attempting to open the door; AND, I was not the “enemy” at the time – I was supposed to be on the team that occupied the second floor!

I did NOT have a physical, favorite hiding place in the neighborhood.  When it came to playing “Hide & Seek,” I ran too slowly to beat the countdown in enough time to hide securely.  Therefore, I would have to choose a place closer to the “seeker” just so I would have the opportunity to beat him to the “base” before he could tag me.  You guessed it – as a result, I was “it” most of the time.  I had to use my head more than my legs, so I would often sit down in a hidden spot closer to the base, and wait until those who were hiding grew impatient and tried to make it “home safe!”  I suppose that is one reason they did not choose me to be “it” at the beginning of the game.

Biblical scholars are not in total agreement as to whom Psalm 91 should be attributed.  While ALL agree that it is God’s Word, there is no agreement as to who wrote it.  Nonetheless, regardless of who authored it – I love this Psalm! We have been “standing” on this Psalm since the beginning of this “Virus Pandemic!”

I discovered something quite interesting – Psalm 91 is better understood when John 15-17 are read at the same sitting.  I believe the writer of Psalm 91 had the “Holy of Holies” in his mind as he expressed His heart toward God.  Assuming that David wrote this Psalm, it is possible that David was speaking with Solomon and God “joined” the conversation as David recorded it all in Psalm 91.

Perhaps it was like this…. “I’m telling you son (Solomon), if a person could live in the Holy of Holies the Peace, Protection, and Provision of Almighty God would overshadow him.  There would be no safer place!”

Solomon possibly responded, “Dad, I don’t have to be in the Holy of Holies – I’m not the High Priest – but, I’ll tell you, my God is my secret place AND my fort, therefore I have learned to trust in Him!”

You can conceivably weave Psalm 91:1-8 into such a conversation between David and Solomon until you get to verse 9.  From then on, it is as if the Lord (The Word) is so moved by the faith-filled conversation of praise and worship that He could not remain quiet any longer!  As a result, it seems as if The Word of God whispers from heaven, “I’ll tell you one thing, since you have placed My Father as #1 in your life, this is what He will do for you…(vv. 9-13)!”

The conversation of praise and worship seems to build to a crescendo beginning with verse 14 wherein it appears that God, the Father, thunders from heaven, and says, “Because you have made Me #1 in your life, I shall not only make sure of (vv. 9-13), but I shall…(vv. 14-16).

I know the scenario I presented is purely speculative; however, if you read John 15-17 considering Psalm 91, you will obtain great insight into the “Secret Place.”  The Word of God teaches us that the Holy of Holies was where the Ark of the Covenant abided as the Shekinah Glory of God was made manifest as the High Priest sprinkled the blood of the annual sacrifice upon the Mercy Seat.

I suppose many asked the High Priest how it felt to be in the Presence of God.  I feel certain they would ask him to describe what he saw, etc.  I also believe that the High Priest could not adequately express or describe his experience.  Perhaps, his response would be closer to, “You would have had to be there to understand!”

Jesus, the “I AM,” is the Shekinah Glory of God!  Hebrews 1:1-3 (KJV) “God, who at sundry times and in divers manners spake in time past unto the fathers by the prophets, Hath in these last days spoken unto us by his Son, whom he hath appointed heir of all things, by whom also he made the worlds; Who being the brightness of his glory, and the express image of his person, and upholding all things by the word of his power, when he had by himself purged our sins, sat down on the right hand of the Majesty on high;” (Emphasis Added)

When Jesus said, John 15:7 (KJV) “If ye abide in me, and my words abide in you, ye shall ask what ye will, and it shall be done unto you,” perhaps He had Psalm 91:1 in mind.  The manifest Presence of God was not readily available to everyone through the practice of the Law and the teaching of the Jewish leaders.  The High Priest became haughty and exclusionary in his demeanor and practices; therefore, there was no hope to “Abide under the shadow of the Almighty!”

Maybe God was teaching me this as a child as I attempted to excel at “Hide and Seek!”  As I told you earlier, I did not have a physical, favorite hiding place in my neighborhood.  I loved to spend time in the Sanctuary of the church I attended as a child.  I was often alone as I prayed and meditated on my Lord.  It was there that I first “heard” His voice.

As I left the Sanctuary, I recall thinking, “I wish I could take the Sanctuary with me!”  That is when I heard Him say, “I’m right here with you!”  It was then, as tears filled my eyes, that I realized that the Sanctuary – the “Secret Place” – was a Person, and His Name is Jesus!!!

I shall continue to stay focused on His “Voice” instead of the “Virus!”

I recall a very dark night in 1971 wherein fear should have consumed me, I “heard” His Voice saying, “I am right here with you!”  In case you are wondering, it was the same “Voice” I heard some 12 years earlier. Suddenly, the blackness of that terrifying night became the “Shadow of the Almighty!” I was with the “Secret Place!”