The Spirit of Fear 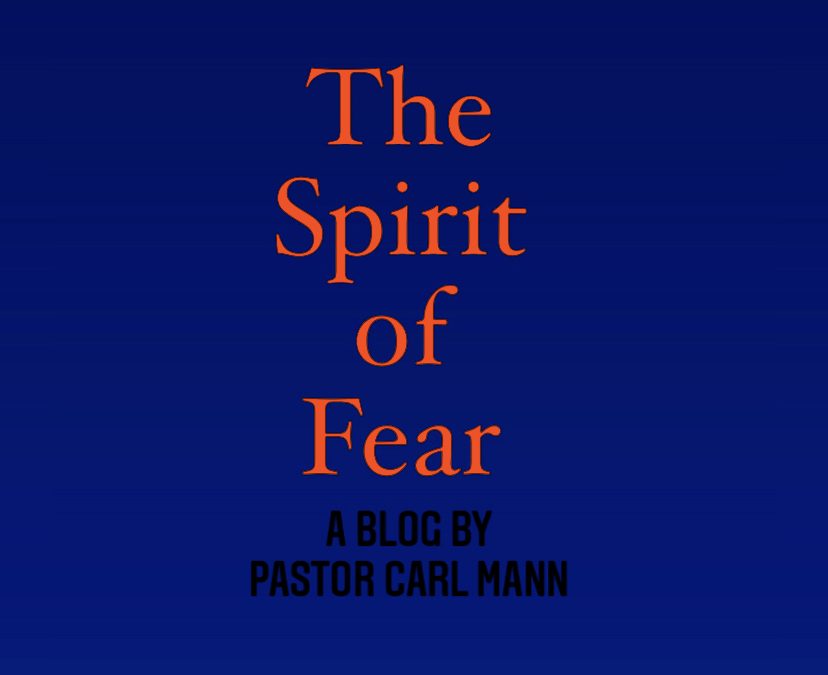 As I have stated several times in our daily “One Calls,” this “Virus Pandemic” has given a huge opportunity for the Enemy to promote his “Spirit of Fear!” As the “prince of the power of the air” (Ephesians 2:2), he has shown how he can manipulate mass communications to deliver his “Message of Mayhem” and exalt “Fear” to such a pinnacle that it overshadows “Faith!”

We who are enlightened by the “Spirit of Life” do NOT need to fall prey to the Enemy’s deceits, devices, and distractions. IF we do, it will be by our “choice” and willful disobedience and disregard of God’s Word. Jesus is the Word of God (John 1:1), and John 8:36 (KJV) “If the Son therefore shall make you free, ye shall be free indeed” (Emphasis Added).

I love the Fall Season – the brilliant colors of the changing leaves, the harvest moon, the cooler days, and colder nights, and the “Scents of the Holiday Season.”  BUT I hate how Satan has invaded this special season with Halloween!  It is NOT my intention to transfer the “Spirits of Religion or Legalism;” however, there is an alarm that rises within me at this time of year because the “Spirits of Death and Fear” are exalted at a time when God intended to use this season to remind us that while all things will come to an end, the “Spirit of Life” always triumphs over the “Spirit of Death.”

Prior to the “fall” of Adam, mankind did NOT know there was such a thing as a “Spirit of Fear!”  Adam, Eve, the earth, all the animal kingdom, vegetation, sea life, and all the natural elements of man’s environment lived in perfect harmony BEFORE Satan invaded that peace and introduced the “Spirit of Fear.”

I do not know about you; but I have a healthy dislike for snakes. There was a time, however, that man did not fear any animal, reptile, or any other creature.  Even when the “serpent” spoke to Eve in the Garden of Eden (Genesis 3:1), she did not recoil in fear that a serpent was talking to her!  He did not make any hissing sounds – he spoke to her in an intelligible language and she spoke to him. Today, I am sure that we would be startled by the sound of a snake talking to us!

Eve entered a conversation with the serpent, succumbed to his tempting words, and passed his “spirit” on to Adam (Genesis 3:6). As a result, the “eyes of both of them were opened” (Genesis 3:7) and they fled from the Presence of God in the “Spirit of Fear” (Genesis 3:8).  The “Spirit of Fear” captivated them to see God as He was NOT, to see themselves as God did NOT, and to see their surroundings as God did NOT create them to be.  Their view of God decreased while their view of Satan and their selves increased.

Because of their “fall,” Adam and Eve stopped focusing on life and started focusing on death.  God warned them that the result of their disobedience would be “death” (Genesis 2:16-17).  BUT they had no concept of death until they saw the results of their sin – God made “coats of skins” (Genesis 3:21).  This required as least two animals (“skins”) to sacrifice their lives to “cover” their nakedness.

It is so sad that Adam traded his authority for anxiety!

When God created Adam and Eve, He gave them the Spirit of Power (Father), the Spirit of Love (Son), and the Spirit of a Sound Mind (Holy Spirit).  God’s Presence was “with” them continually, while His manifest Presence was made known unto them only at certain times (Genesis 3:8; Acts 3:19).

The “Spirit of Power” is the Presence of God to perform mighty, miraculous, and meaningful works that will bring glory and honor to God and elevate the wonder of His Presence.  When Adam and Eve walked before their “fall,” ALL creation saw them as “little gods” as they walked with dominion over it.

The “Spirit of Love” is the Presence of God to present life, love, and laughter that not only is transcendent, but is also transmittable; thus, the Love of God is made manifest not only in the presence but also with the passing of the one who is walking under its influence.  When Adam and Eve walked before their “fall,” God’s Love was being spread in such a manner that just their breath brought refreshment to the earth.

The “Spirit of a Sound Mind” is the Presence of God to possess a controlled discipline, determination, and deliberation that promotes harmony, happiness, health, and hope – not only in the one who walks under its influence, but also those who are exposed to its wake.  When Adam and Eve walked before their “fall,” the earth and all its “fullness” was reassured that all was well; and, although an “enemy” was present, there was no need to fear because God was in control and would “keep” it.

I bring your attention back to Halloween for a moment.  There is nothing funny, family-friendly, or fantastic about this Satanic feast day.  It is focused on death, darkness, and demon-power presented in a manner that looks harmless.  Nonetheless, everyone that willingly participates in its beguilement “opens” himself to the same spirit that Adam and Eve did.

There will be an increase in “horror” movies on television during this season.  Many parents will sit down and watch these movies WITH their children – just for the “scare” factor!  I cannot tell you how many souls I have counselled that had to combat a “Spirit of Fear,” whose roots were found in the seemingly harmless practice of being “scared.”  It is interesting that we only must change the place of the letter “c” with the letter “a” to form the word “SACRED!”

Jesus came to deliver us from the works of the devil…

Colossians 1:12-14 (KJV) “Giving thanks unto the Father, which hath made us meet to be partakers of the inheritance of the saints in light: Who hath delivered us from the power of darkness, and hath translated us into the kingdom of his dear Son: In whom we have redemption through his blood, even the forgiveness of sins:” (Emphasis Added).

Hebrews 2:14-15 (KJV) “Forasmuch then as the children are partakers of flesh and blood, he also himself likewise took part of the same; that through death he might destroy him that had the power of death, that is, the devil; And deliver them who through fear of death were all their lifetime subject to bondage” (Emphasis Added).

1 John 3:8 (KJV) “He that committeth sin is of the devil; for the devil sinneth from the beginning. For this purpose the Son of God was manifested, that he might destroy the works of the devil” (Emphasis Added).

I am not afraid of “fear,” – I just do NOT enjoy being “scared!”  Why would anyone want to willingly place himself into a situation where Satan would “seize” the invitation to place his “Spirit of Fear” upon them?

Ephesians 5:11-12 (KJV) “And have no fellowship with the unfruitful works of darkness, but rather reprove them. For it is a shame even to speak of those things which are done of them in secret” (Emphasis Added).

The “mystery” of Halloween is that Satan does not care that you do not take this day seriously.  In fact, he hopes that you and I will not take him seriously at all.  BUT you must be reminded – God takes all this seriously.  He gave His Son to die for us so we could be delivered from the “Spirit of Fear!”

God also takes it seriously when we willfully “submit” to the very spirit from which His Son set us free – at the “Cross of Calvary!”