Who Can Beat Us? 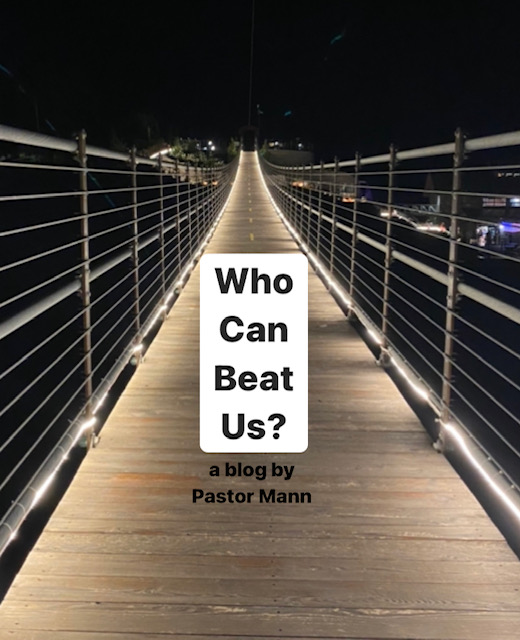 In the Name of Jesus, and through faith in His Blood, I believe this “Virus Pandemic” will NOT “beat” us! I believe there will be manifold testimonies of our Lord’s “keeping” power when this pandemic is over. I pray every believer will not only overcome this “season,” but will also walk IN victory and faith both now and in the world to come! I believe this because “God IS for us!”

I have listened to folks talking about their interest in playing “multi-player” games on the internet and how good some of these players are.  I recall overhearing a fellow saying, “I do not know who this player is; but I am NOT able to beat him!  He must spend all his time on the computer!”  My thoughts went to, “Yup, he is on-line at least as often as you are…AND he likes to win!”

I like the computer games that enable me to manipulate the settings to ensure that I win every time!  I want to give my computer opponents just enough ability to put up a good fight; but I do not want any of them to have the ability to ultimately overcome me!  The only way I can lose is to “surrender” or “beat myself” through neglect. You see, I play to relax – NOT to be stressed out!

Some might think this is unfair, perhaps.  Others might say that there is no glory in winning in such a manner, I do NOT care!  Did I mention, I like to WIN?!  Because I set the “abilities” of my opponents below the “accepted” levels of competition, I am not allowed to place my name on the list of “High Scores” at the end of the game.  I just laugh – I like to WIN!

Life is NOT a game; however – it IS a challenge to the “death!”  After we have given our lives to Christ and enter the realm of the “saved,” we enter into the arena of spiritual warfare wherein we do NOT have the capacity to set the level of our opponents’ abilities.  In fact, we are made significantly more aware of own weaknesses and ineffectiveness to wage spiritual war with an enemy that seems to be “on-line” 24 hours a day and who likes to WIN!

Apostle Paul makes such a strong case on behalf of God’s Amazing Grace in the Book of Romans.  He begins the Book by establishing God’s wondrous love for lost humanity by preparing the glorious plan of salvation through Jesus Christ, His Son, then he states that God has openly declared His glory and existence in and through His creation so that all mankind may know and believe.  You see, this was a “hint” that God was enabling everyone to WIN because He can do so!

After establishing God’s wisdom and generosity that is evidenced in His amazing grace, Paul declares the mystery of “Resurrection Power” in Chapter 7 that states we have the capacity to operate in Christ’s life-giving power as believers who are saved from sin and given the ability to avoid the entanglements of sin that we were so addicted to prior to salvation.

Paul presented the spiritual fact that once we are Disciples of Christ, we are walking in an unredeemed body that is a slave to sin while we have been spiritually released from sin’s hold and sway.  The hardest battle that we will ever wage is against our “old” nature that is “at home” in this lost world.

Romans 7:24 (KJV) “O wretched man that I am! who shall deliver me from the body of this death?” (Emphasis Added).

The truth is that God saw that everything was against us; and, He intervened and sent His Son to place the odds in our favor!  When Adam fell in the Garden, lost humanity was placed at a great disadvantage. Our enemy, Satan, was more adept in the spiritual realm because our spiritual eyes were “blinded” by Adam’s sin, and we were “dead” and didn’t know it.

But, Jesus came to give us life – Eternal Life!  When Jesus triumphed at Calvary, He placed the enemy in a disadvantaged position and gave the “advantage” to all who call upon His Name!

Colossians 2:13-14 (KJV) “And you, being dead in your sins and the uncircumcision of your flesh, hath he quickened together with him, having forgiven you all trespasses; Blotting out the handwriting of ordinances that was against us, which was contrary to us, and took it out of the way, nailing it to his cross;” (Emphasis Added).

Paul presents the wonderful ability that all who “walk in the Spirit” possess to please God and WIN every battle with the enemy.  This is made possible because Jesus has already “Won the War!”

Colossians 2:15 (KJV) “And having spoiled principalities and powers, he made a shew of them openly, triumphing over them in it” (Emphasis Added).

Paul states clearly that we are contending with a determined foe that is “on-line” 24 hours a day, 7 days a week.  He presents that God has set the stage for all of us to win…

Romans 8:31, could legitimately read, “Since God has already won the battle, AND is on our side, it’s impossible for us to lose!  So, let us ‘play to win’ knowing we cannot be beaten!”

Romans 8:37-39 (KJV) “Nay, in all these things we are more than conquerors through him that loved us. For I am persuaded, that neither death, nor life, nor angels, nor principalities, nor powers, nor things present, nor things to come, Nor height, nor depth, nor any other creature, shall be able to separate us from the love of God, which is in Christ Jesus our Lord” (Emphasis Added).